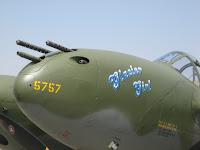 FROM GLACIER TO GLORY

Philadelphia, PA (May 24,2007)—On July 15, 1942, a United States Army/Air Force Squadron departed American soil on Operation Bolero, a World War II aid mission to support U.S. allies in the war torn European theatre. Due to insurmountable weather-related problems en route, the entire squadron of six P-38s and two B-17 Bombers was forced to abort its mission and make an emergency landing on a remote ice cap in Greenland. “The Lost Squadron,” as it has become known over time, drifted miles from its original location and only one P-38, encased in 268 feet of ice, was salvaged.

A recovery and restoration mission taking more than ten years and costing over a million dollars brought this legendary P-38 Lightning, now known as Glacier Girl, to her original flying glory. On June 23, 2007, Glacier Girl will finally complete her fabled World War II transatlantic mission when she departs from Teterboro Airport in New Jersey bound for Duxford, England.

“This monumental flight will bring closure to Operation Bolero as well as pay homage to the brave aviators who beat the odds to survive certain death on that polar ice cap in Greenland during World War II,” said pilot Steve Hinton, who will fly Glacier Girl in her transatlantic flight in June. “It’s thrilling to be a part of this historic event.”

Dubbed Operation Bolero II, after the original WWII operation, the mission remains as challenging as it is historic. Glacier Girl will be accompanied by the P-51 Mustang Miss Velma, a vintage WWII U.S. war bird that will be flown by air show legend Ed Shipley. The P-51 will be equipped with Wingspeed Corporation’s satellite-based aircraft communications technology that will allow anyone on the ground to communicate with the pilots via email communications and receive answers from the cockpit while the planes are in flight. Wingspeed’s network will also allow real time tracking of Glacier Girl’s historic journey exclusively at AirShowBuzz.com, a new social networking and user-generated/content-sharing Web site for aviation enthusiasts.

“It’s an honor to be Steve’s wingman as we trace the same flight path that Glacier Girl flew over 60 years ago,” said Shipley, US Air Force Heritage Flight pilot and founder of AirShowBuzz.com. “Wingspeed’s cutting edge communications technology will allow us to chat with enthusiasts from anywhere on the globe while we’re in flight, so the world can experience this with us.”