Though it's taken approximately seven months and countless hours of work, crew members are close to completing the restoration of the CAF's B-24, with a new look and new nose art to be revealed next month.

The CAF's B-24, known as Diamond Lil, is one of two flying B-24s in the world, said Kay Crites, director of public relations for the Commemorative Air Force (CAF). The Collings Foundation owns one and the CAF purchased its B-24 in 1968. Now after several months and nearly 3,000 hours of manpower, Diamond Lil has been restored to her original B-24A configuration.

"It's the new and improved version of our B-24. We're excited to have her return to her more historically accurate configuration," Crites said.

"It's an important part of our mission to tell the story of World War II and to honor those who serve. The reconfiguration helps us tell the story by showing what she actually looked like before she was modified for transport purposes."

Interest for the B-24 remains strong today, considering the 202,048 hits received as of Tuesday since Oct. 27 on a Web site featuring war birds and classic military aircraft that has a series of forums with one relating to the CAF's B-24.

According to records, the plane was diverted in 1941 from an Army Air Forces order for B-24As to be given to British Air Commission. But in the fall of that year, Diamond Lil was damaged during a training mission and shortly afterwards, the Consolidated Air Craft Corporation, which built the aircraft, took it back and modified it for transport. The aircraft served in various roles before it was bought by the CAF.

The reason why the crew took on the project was because of its varied history, said Gary Austin, crew chief of the B-29/B-24 Squadron. It was intended to be a bomber and became a transport, prototype and test bed for later versions of B-24s, he said. During the post war era, Diamond Lil served as a corporate aircraft and freight hauler before coming to the CAF, he added.

Austin did a majority of the aircraft's work which began Oct. 27 and hopes the B-24 will be in the air in May.

The aircraft has a wing span of 110 feet, is 66 feet long and 18 feet tall, Austin said. Some new features include four gun positions out of the original six positions. The others will be completed after the Twin Tails ceremony on May 12, Austin said. "This is a work in progress. It takes more than seven months," he explained.

The bomb racks are new along with the paint job, a brown and green camouflage, which was its original paint scheme. It previously was painted in a Ploesti, a north African desert paint scheme.

Austin completed about 80 percent of the work and by the end of the project around the end of May, he will have worked 2,929.5 hours on the aircraft.

"It's a privilege to be able to work on them. It honors the vets and it teaches the younger generations to honor the vets, too," Austin said on why he devotes countless hours to the aircraft's restoration.

"When you get a vet come up and start reminiscing about their experiences in the old airplanes and they tear up, it makes it worthwhile to have such an impact on their lives."

Volunteers and occasional contract workers contributed approximately 300 to 400 additional hours of the work to the aircraft.

In addition to her new paint job and new look, Diamond Lil will be known by her new name, Ol' 927. According to records, AM927 is her serial number and she was known as Ol' 927.

"This is authentic to this airplane. It's what this plane was called," Austin said of Diamond Lil's new name.

The new nose art, however, currently is concealed by a large question mark and will be revealed at the May ceremony.

The painter of the nose art is Chad Hill of Chicago, who 30 years ago saw Diamond Lil at his first air show, Austin said.

While details of the May 12 ceremony are preliminary, the Twin Tails featuring the B-24 will be held in conjunction with the American Airpower Heritage Museum, Crites said.

"The idea is to let the public in on what's become an international interest on this plane," Austin said about what he hopes visitors will gain when they tour the aircraft.

"It's a good opportunity for folks from Midland-Odessa to be the first to see the international interest from this plane." 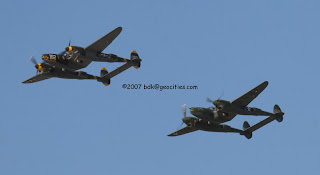 After posting a few pictures of Glacier Girl in Texas I saw pictures of her now in California. Last weekend the Planes of Fame flew their P38 along with Glacier Girl... so 2 P38s in formation together! Thanks to Brandon K. for the picture! A rare sight! The plan for the Chino Airshow in May is for 3 P38s to fly together. Already have my reservations made for THAT show!!
at April 03, 2007 1 comment:

One more from Steve 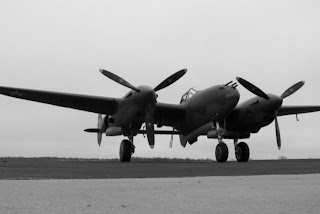 Steve Dickey sent me quite a few pictures of Glacier Girl when she made her stop in Breckenridge so I just had to post another!
at April 02, 2007 No comments:

B24 make over progress

The make over for the CAF B24A is nearing completion. To read about the task and see the details follow this link. If you want to jump ahead it appears that there are now over 100 pages of posts on the forum topic!!
at April 02, 2007 No comments: