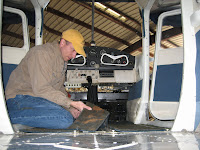 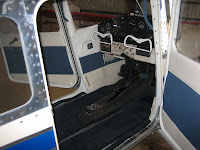 Last weekend I was finally able to install my new carpet in the 170. Only took a few minutes to pull the seats out and install the carpet but it took me several hours to reinstall the back seat! All back together now and flying good.
at February 25, 2007 No comments:

A few more pictures have been posted online of the early model P40 that belongs to The Fighter Collection in England. As of this writing it is being flown out of California.

Scroll down this page for the pictures.
at February 25, 2007 No comments:

I read an article in Forbes magazine a few years back about Jerry Yagen and his technical training schools but what captured my interest was his growing collection of vintage aircraft. One of the first aircraft I saw owned by Mr. Yagen was his Spitfire Mk. IX at Oshkosh. Not but a few years later I found the web site that lists his aircraft! The Fighter Factory is fast becoming one of the top collections of flyable World War Two aircraft. Emphasis on the FLYABLE part! Be sure to check out this list of aircraft that is under restoration! And if assembling a collection of this size isnt enough a new hangar complex has been built near Virgina Beach to protect it! New build hangars with a 1940s look along with a few World War Two structures that have been imported from Europe! If you couldnt tell I am impressed with Mr. Yagen and how he spends his money preserving vintage fighters.
at February 06, 2007 No comments:

Pictures have started appearing online of an early model P40 that suggests it has Pearl Harbor history! Rebuilt in California and final assembly at the Chino airport.

Compare this early model to other P40 models here.
at February 05, 2007 No comments: