Warbird and Vintage Aircraft Restorations to Watch in 2012 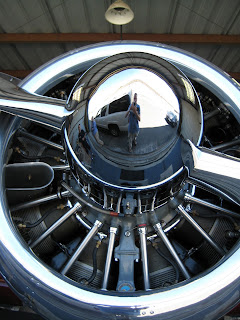 Another year is upon us and I can't help but think of the the restorations under way that are to fly in the next year or two.  Some aircraft types we have not seen grace the skies for many years and others may be a little more common but will stand out as spectacular works of art.  Here is a short list of the ones we are watching and will be making headlines within a few short years.

The Lufthansa Starliner - The German airline acquired a Lockheed Constellation and began the extensive restoration back in 2008.  To say this is a major restoration is an understatement.  The "Connie" is a full time project with hopes that the Starliner will fly within the next couple years.  This sleek airliner will make magazine covers worldwide when she flies and Lufthansa plans to make flights in her available to the public.  Watch the Connie Survivors web site for updates.
Link - www.conniesurvivors.com

Two P-82 Twin Mustangs - One, let alone two would capture the aviation worlds attention.  Two restorations are under way of this rare twin.  C and P Aviation in Minnesota and Tom Reily in Georgia are actively restoring Twin Mustangs for flight.  We should see great progress made this year.  It will be exciting to see them sitting on their own gear and rolling out for progress photos.  What a dreamy photo this will make to see two in formation roaring around the skies with Merlins and Allisons screaming!  Watch the XP-82 Twin Mustang Project blog for updates on one of these restorations.
Link - http://xp-82twinmustangproject.blogspot.com

Mosquito - Recently a rare Mosquito was rolled out into the light of day.  All new wood and fully restored this will be a stunning restoration.  Once completed in New Zealand this ultra rare de Havilland Mosquito will reside in Virgina.  Wow… what else can we say!?  A flying Mosquito!!!
Links - http://www.warbirdrestoration.co.nz/ - http://www.militaryaviationmuseum.org/ - http://www.fighterfactory.com

Brewster F3A-1 Corsair - Yes, a Brewster built Corsair.  Vought did not build all of the mighty Corsair fighters in world war two.  Brewster built them under license to pump out more fighters for the war effort.  This rare bird is under restoration in Texas with Ezell Aviation.  It may be a few years from flight but this will become the rarest Corsair in the skies!
Link - http://www.ezellaviation.com/f3a.html

Vultures Row Aviation to turn out two Navy Warbirds - In California a small shop that has turned out award winning Navy aircraft is restoring two rare birds to exacting standards.  A Curtiss SB2C Helldiver and a Douglas SBD Dauntless.  Slow and steady wins the awards at this shop.  When these Navy birds fly into airshows across the country they will take all the awards and have Warbird enthusiasts drooling on the ramps!
Link - http://vulturesrowaviation.com/

P-47 Dottie Mae - Allied Fighters in California is well along in the restoration of this rare gem.  This P-47 was pulled from a lake in Austria with markings and nose art still visible!  A large portion of the airframe and its components will be used in the restoration to flying condition.  Another restoration to watch as it progresses.
Link - http://www.alliedfighters.com/flash.html

Waldo Wrights Travel Air on floats - On a smaller scale… The Travel Air will be exciting to see take to the skies.  What makes this Travel Air so unique?  It will be on floats!  What makes it even more unique?  You will be able to enjoy a ride in it!  Waldo Wrights Flying Service operates out of Florida at Fantasy of Flight giving rides to anyone who wants to experience the Golden Age of Aviation.  I have flown in the New Standard and a Stearman.  Sign me up for a ride in the Travel Air seaplane!
Links - http://www.waldowrights.com/ - http://www.aerocraftsman.com/

There are MANY more rare and historic aircraft being restored around the country and around the world.  Stay tuned here as we hope to cover more aircraft restoration news as the updates are made public!
at January 10, 2012 3 comments:

Spent the day out at NW Regional Airport on New Years Eve day.  It was a warm, sunny Texas winter day with temps in the 70s.  Perfect for cleaning up the 170 and catching up with friends around the airport.  The great weather brought out quite a few visitors to our airport.  Below are a few pictures from the day.