The National Waco Club held their 50th Annual Fly-In back in June and these pictures were just sent to me. Over 100 quality pictures of some rare and beautiful Wacos. 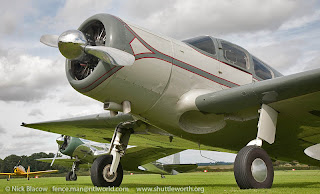 Two Spartan Executives now call England home. This picture was taken recently after S/N 14, NC17615 made the flight across the Atlantic. Thanks to Nick Blacow for the image.
at August 23, 2009 No comments:

Here it is the year 2009 and I am loading up in a modern airliner to travel to Vancouver, WA to see a showing of aircraft from the 1930s. Would the people back in the 1930s laugh today if they knew we would go to such great lengths to restore, fly and display aircraft from that era? To them these aircraft were machines that transported them the next town or even across the country. Collectibles? Museum Pieces? Objects of men's desires to transport them back to another time? I don't know for sure but I think they WOULD be laughing at us! For me this was another opportunity to view these rare aircraft in an environment where they are truly appreciated.
I have written before about how when traveling across the country at 30,000 feet in an airliner bound for a vacation or aviation event that I wonder what it would have been like to travel back in the 1930s. Dressing up in a suit, hat and boarding a classy Ford Tri-motor with wicker seats, that had to be quite an exciting experience.
My excitement for this trip came from knowing I would see vintage aircraft I had not seen before. This would be my first fly-in to visit up in the Pacific Northwest. When my family and friends first walked into the front gate at the Northwest Antique Airplane Club 50th annual fly-in at historic Pearson Field our eyes were drawn to the first row of biplanes. Two Waco's caught my eye but at first glance I thought they were modern built versions. At closer inspection I was pleasantly surprised to see that they were both original Waco YMF's. One was a Grand Champion caliber restoration sporting an original black and white paint scheme. The other was a clean yellow and black ship. A rare treat.
Another type that captured my interest was the Fleet biplanes. Three of the type flew in for the event and all were nice examples. The Stinson 108 owners all parked their classic ships in a row. Most of the other types were scattered around the field. Other highlights in attendance were... a very clean Howard DGA, a rare Stinson Jr. S, two good looking Bucker biplanes, several detailed classic Pipers, and a good showing of classic Cessnas. I don't know official numbers but I would guess there were over 100 aircraft in attendance.
Overall the event was worth making the trip from Texas. The relaxed atmosphere of these antique fly-ins makes for an unhurried pace. The event volunteers were courteous to me when I crossed boundaries and directed me to a spot for better photographs. Even though it was overcast I was able to shoot some good pictures. To see pictures from the event visit here. Click here to see the list of award winners. A well attended event in a great setting. I will return again. Now it is time to pull the map out to search for another event in a new location.
at August 19, 2009 1 comment:

Traveled up to Portland, OR via the airlines yesterday with my wife and a good friend. My wife has family and friends we can visit in Vancouver, WA so I found that the 50th Northwest Antique Flyin would be this year at Pearson Field. Texas in August is usually warm so these 60-70 deg. temps make for pleasent walking around airplanes weather!
This afternoon we walked around the early arrivals at Pearson. So far a fairly good turn out... maybe 50 airplanes. Two very nice 1934 Waco YMFs and two nice Fleets. A good number of classic Pipers and Cessnas. Should be a good show! If time allows I will post the highlights from the show tomorrow night. Pictures to come when we are back in Texas.
Northwest Antique Fly In.
at August 14, 2009 No comments: 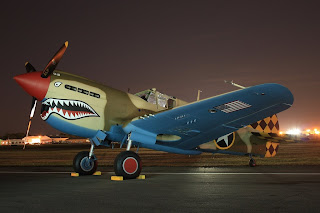 The 2009 Award winners are now posted on the AirVenture web site. Check them out here. Sounds like this was a good year for the P-40s. I read that 5 of the Curtiss fighters made the event. Al Sauer shot the beautiful nighttime shot of Ron Fagan's Grand Champion P-40E. Thanks to Al for letting me post the shot.
at August 06, 2009 No comments: