Last week I published a blog titled The Future of Vintage Aircraft Operation and Restoration.  This was a culmination of thoughts I have been composing in my head for months.  I finally wrote it out and wanted to post it so that it might spark some thoughts in my fellow aviation enthusiasts.  A few weeks ago I read an article by Walter Boyne in ProPilot magazine.  With his permission I am posting it here as I really like the direction of his thoughts towards the future!  Could we see a new "country club" type organization join the aviation community together for social interaction?  I like the idea!
Dan

The Sikorsky S-38 owned by Unlimited Adventure sets off today on its Trans-Atlantic journey!  EAA has posted a short story here.  Talk about traveling back in time!  What an adventure!
at August 21, 2010 No comments:

The Future of Vintage Aircraft Operation and Restoration 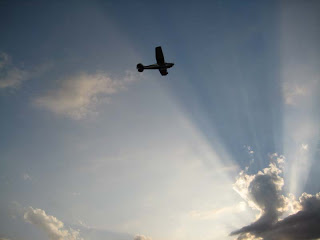 A few years from now will we still see vintage aircraft flying through the skies?  What does the future hold!?

Many issues come to mind in looking to the future of vintage aircraft operation and restoration.  Issues related to engine parts, airframe parts, fuel, and the costs of all of those items rolled into what we will call "operational costs" for this article.  Who has the skills and tools to restore and maintain vintage aircraft?  Are the skills to fly these aircraft being taught to new pilots today?  Then, what could be done to generate an interest in flying? What needs to take place to bring more people into the aviation community?  How do we educate the newcomers and current pilots to the history and heritage of vintage aircraft?  I don't have answers to all of these issues but I do have thoughts on some of them.

One of the main factors that does give me hope for the future of vintage aircraft is technology.  Today's technologies provide us with the tools we need to make from scratch the once extinct engine and airframe parts.  With new technology we can build old technology!  And build it better!  Over time the parts have become unusable because of age and wear.  With the advance of technology the cost to produce new parts comes down and this should help with operational costs.  I am very excited that vintage aircraft parts can be built.  Put all those parts together and once extinct aircraft can be reborn!

Examples of technology in action for vintage aircraft would be... A company in New Zealand, The Vintage Aviator, is building brand new engines for World War One era aircraft!  Another company is building brand new spars, very complicated spars, for the F4U Corsair!  In Arizona a shop is turning out brand new Boeing 100 series biplanes.  A Texas company built up brand new copies of the Grumman F3F and German Me-262.  I could go on.  My hope is that more enthusiasts will invest in building and rebuilding vintage aircraft.

So technology and tools are one part but who will operate that technology and those tools?  Are there ways to educate future generations to what is needed to keep vintage aircraft flying?  A glimmer of hopes exists in me as trade schools and aviation camps provide a draw into aviation.  From those schools and events we can teach the history behind our vintage aircraft and hopefully draw an interest.  There are many aviation trade schools around the country (one here - Redstone College) and a few aviation camps.  Peach State Aero has a camp and EAA has their Air Academy summer camps.  That is good news for the aviation community!  Are we supporting these organizations?  Let's do what we can to spread the word about these schools and camps!

As the airplanes are maintained to continue flying and restored to fly again, where will they be based?  What airports?  What hangars?  What will the aviation community and vintage aviation community do to provide an outlet for those owners and pilots?  Local chapters of national organizations provide monthly social events, activities and fly-ins.  Are those local chapters drawing in their friends, neighbors and other community organizations?  Could more be done?  Back in the 1930s there was an aviation country club in New York.  Why don't we have those?  Why aren't there more aviation friendly locals and vacation destinations?

I know I have presented a lot of questions here and as I stated I don't have answers to them all.  I would love to hear from readers what they think of some or all of these issues that deal with the future of aviation.  You can comment on this blog or send me an email.  I will re-publish the emails if relevant ideas are presented.
at August 17, 2010 2 comments: 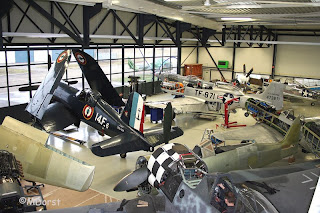 Visiting the WIX Hangar is on my daily to do list.  Some days it takes me a few minutes to catch up on some of the Warbird news.  Other days I have to take the time to read some of the great posts from all over the world!  Matthias Dorst is the webmaster for MeierMotors in Germany.  He has posted a series of pictures from the MeierMotors hangar. 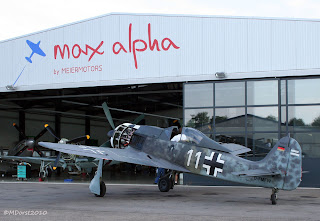 This shop is fast becoming THE place to have your Warbird worked on in Germany!  Not only do they have a cool looking hangar but what is IN the hangar is some of the most unique Warbirds in Europe.  Plan to take a few minutes to read through this forum post.  What a place!  Thanks to Matthias for allowing me to post a few photos here! 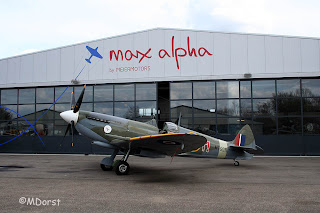 Thanks to Mike Shreeve for posting pictures of this fantastic line up of Ryans over on WIX!  Check out this beautiful line!

The photo galleries for Oshkosh 2010 can be found on EAAs web site here...

- Posted using BlogPress from my iPhone
at August 10, 2010 No comments:

The summer is passing by rather quickly this year.  As always there is yard work and household chores that fill the summer task lists.  For most aviation enthusiasts July means it is Oshkosh time.  I knew I wouldnt make it up this year as the family had a Colorado trip planned.  We spent a week in the mountains near South Fork, CO and enjoyed the cool weather, mountain scenery, some hiking and fly-fishing. 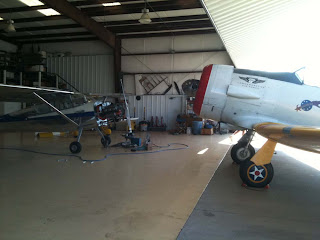 Before the trip I opened up the 170 for the annual inspection and turned my mechanic loose.  A few issues popped up this year.  One cylinder needed work along with some exhaust brackets.  The last piece to address is the broken spinner back plate.  It appears that age has caught up with the back plate and a new spinner and back plate are on order.  Hopefully it will arrive in the mail soon so I can drop it off to be painted.  A few friends have asked why don't I just polish it.  What?  I don't need MORE to polish on this airplane!  Anyway... it came out of the factory painted so it will be painted to match the cream trim color.

I have been looking over a few pictures posted from Oshkosh on various web sites and forums.  The weather was a factor this year as the show grounds became soaked with some serious amounts of rain!  It sounds like the weather improved for the later part of the show as some show aircraft arrived on WED and THUR of the event.  A few highlights that I noticed were... the Hamilton Metalplane, the replica Caudron racer, over 20 DC-3s, several new Mustang restorations and one outstanding Corsair restoration.  When I can round up some links to the highlight pictures I will post them.
at August 01, 2010 No comments: