Today I was off of work to enjoy part of the New Years holiday so I spent a good portion of the day in the hangar.  My normal hangar flying buddies were not there today to distract me so I actually had a productive day working in the hangar.  Not that I think catching up on the airport stories is a waste of time... it just is a different type of aviation therapy to actually WORK in the hangar!

I unloaded some of the Christmas gifts out of the truck and spent a few minutes unpacking them.  One gift was a light weight drill from my parents.  My old drill had bit the dust a couple months back and I had resorted to the manual screw driver.  (Gasp!  Manual?!)  The big heavy drills for working around the house just aren't that good for working on the airplane.  With the battery charged I tried it out.  Works... and is not too heavy or too much power. 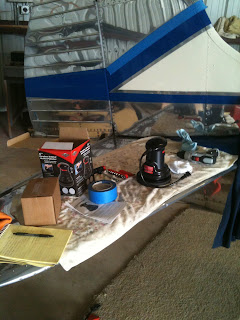 The next gift to be unpacked was a small six inch buffer from my father-in-law.  The Cyclo buffer/polisher is my polishing work horse but it can be heavy when trying to hit those vertical surfaces.  The new buffer can be palmed and is not heavy.  The rudder buffed out nicely with my normal procedure and using the new palm sized buffer!  A great gift and it will be useful for those higher vertical surfaces.

The weather was warm but windy with low clouds when I arrived mid-day.  As the day wore on I would peek out the hangar doors to do a weather check.  The clouds lifted and eventually cleared out.  So I wrapped up the polishing.  The windsock finally stopped its vigorous flapping so the classic Cessna was wheeled out for a flight.  It felt good to get up even if it was a short flight at sunset.  2010 wasn't a full year of flying but the Cessna helped get my feet off the ground for some much needed arial therapy.
Hope your 2010 was adventurous and may you have more Blue Skies in 2011. 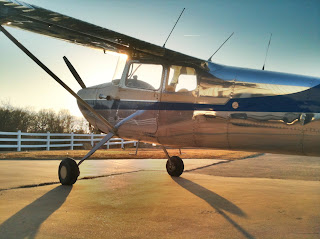 A fun story from the Warbird email circles... Merry Christmas!

Santa's Ride
THE NIGHT BEFORE CHRISTMAS'Twas the night before Christmas all over the place,When we were confronted by an old flying ace.There was icing reported and turbulent air ,He said, "File me a flight plan, I gotta get there".Outside sat his aircraft all ready to run,And the old man walked out to that P-51."Bad weather's no problem," he silently mumbled,The prop came to life...that big Merlin rumbled.He eased in the throttle, the roar shook the ground,He taxied on out and turned it around.He went through the run-up and seemed satisfied,Then he said to himself, "I'm in for a ride."So he lined it up straight as he poured on the coal,The tailwheel came up as he started to roll.Up off the runway, he sucked up the gear,And that mighty V-12 was all you could hear.He screamed overhead with a deafening crack,Blue flames flying from each little stack."He pulled up the nose and started to climb,No ice on that airframe, it didn't have time. On top of the weather with the levers all set,He looked up above him and saw a Learjet."With jet fuel and turbines there just ain't no class,Gimmee pistons, and props and lots of avgas!"Now he was approaching where he wanted to go.But the weather had covered the runway with ice and with snow. How will he land it? We just have to guess, because the only way in was a full I-L-S.Then over the outer marker, he started his run,The ceiling was zero, visibility...none. Still going three hundred and he felt the need,For an overhead break to diminish his speed.Over the numbers he zoomed, along like a flash,Pulled into his break, we just knew he would crash.Oh, why do they do it on these kind of nights??Then over the threshold, we saw landing lights.I'm on a short final with three in the green,And I see enough runway to land this machine.".Then he tied down that Mustang, and they all heard him say,.."Next year, I'm stickin' with my reindeer and sleigh.."--author's name withheld by request--.............OK, I can't keep a secret..... Santa Claus
at December 23, 2010 No comments: