This past week was the big show in Oshkosh and I have been on the internet every couple hours looking for pictures highlighting the event.  Sure looks like it was a good turn out.  This morning I pulled up the list of award winners and was not surprised at some of the winners.  Follow the link below to the 2012 Oshkosh award winners... 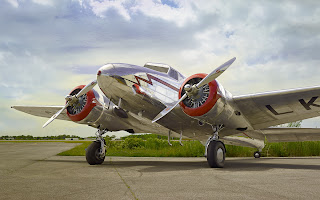 Peter Ramm was awarded Antique Grand Champion for the restoration of his beautiful 1937 Lockheed 12, serial number 1222, registered as CF-LKD. (Photo provided by Mr. Ramm.)  Congrats to Mr. Ramm!  All the hard work paid off!  (For more on surviving Lockheed 12s see our survivors web page.  Follow the link at the bottom of this post.) 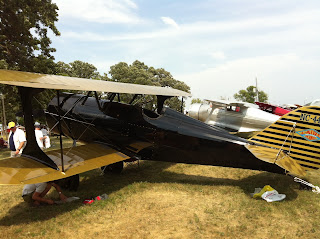 In the classic listing I spotted a 1954 Cessna 170B, N1899C that took the Classic Reserve Grand Champion.  Just a few weeks ago I found the blog where young Mr. Barron was posting the progress on the restoration of this 170B.  Go see the photos of this detailed restoration!

On the Warbird listing two amazing restorations that I have been watching topped the charts.  Warbird Reserve Grand Champion - World War II went to Rod Lewis and his Curtiss P-40C, N295RL.  We featured a blog post about this airplane last year.  I can't hardly wait to see this early model Curtiss in person! 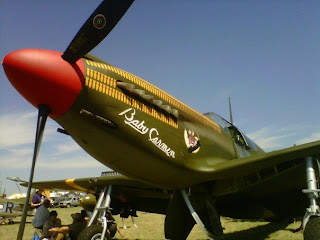 The award for Warbird Grand Champion went to The Collings Foundation for their North American A-36 Apache, N4607V.  (Photo by Jim Buxton.)  An off shoot of the Mustang design this rare fighter-bomber attracted a lot of attention and appears to be a restoration of the highest caliber!  Another one I can't wait to see in person.

Watch the news stands for the award winners to be featured in the aviation magazines over the next few months.

Lockheed Vega to be restored to flight 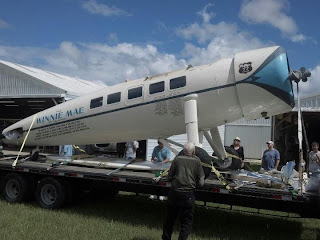 Good news for Lockheed Vega fans!  Kermit Weeks has sent his Vega to Jim Kimball Enterprises to be restored to flight.  Thanks to Jeff Eicher for the photo above of the Vega on arrival at the Kimball's shop.  This Vega spent many years on display at the EAA Museum in Oshkosh, Wisconsin until it was purchased by Kermit a few years ago.  It has been on static display at Kermit's Fantasy of Flight until recently.  We look forward to seeing this Florida based beauty return to the skies!  It wears the color scheme of the famous Vega the "Winnie Mae" but is not the real Wiley Post Vega.  The Smithsonian National Air and Space museum in Washington D.C. is home to the real "Winnie Mae."  (My photo below of the Winnie Mae on display in D.C.) 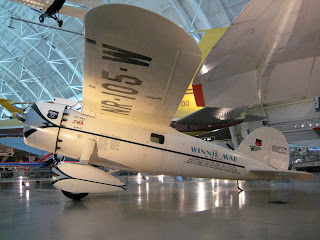 Also coming to light is the restoration of another Lockheed Vega that will return to flight.  Differing from Kermit's all wood example is the metal fuselage model being restored in Arizona.  Click over to the Antique Airfield web site for photos of this restoration in progress.  Follow this link - http://antiqueairfield.com/articles/show/1268-vega-restoration-tail-installed-and-connected

If I were restoring a Vega.... this photo below would be my inspirational photo on the wall of the hangar! 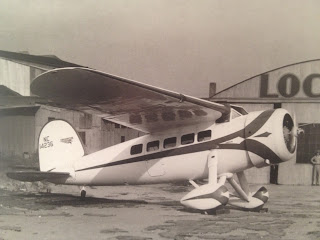 Few Vegas survive today.  So to see one is a rare sight.  The possibility of two returning to flight is exceptionally rare and delightfully exciting! 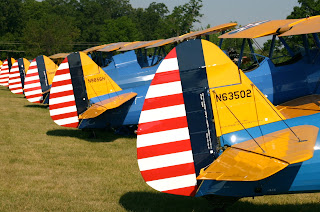 I have been taking photographs of airplanes as long as I can remember.  Now I am excited to share my photographs through books that people can enjoy with friends and family.  My first work features vintage aircraft from the 1940s and 1950s.

These photographs were taken at various events on my travels to Florida, Iowa, Wisconsin and Texas, producing shining examples of the memorable airplanes that aviation enthusiasts love. My hope is that enthusiasts, pilots and their families will have stories to tell of one or more of the airplanes in this book.

I invite you to purchase a copy, sit down with family and friends and tell your own personal stories about Aviation's Enduring Classics.

Click on the book cover below to see the book in the Blurb book store.

It is that time of year again.  Texas is a long way from Duxford so I turn to the PlaneTalk forum to see pictures from this weekends Fighter Collection/Flying Legends Warbird show.  Take a look at a few pictures below from Brian Marshall of the pre-show activities.  Wow... the P-47 flying a few laps to prepare for the action, a hangar full of Warbirds and the Red Bull P-38 arriving for a weekend of flying!  I can hardly wait to see all the pictures that hit the forums from the show! 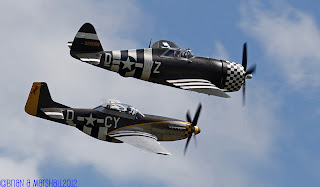 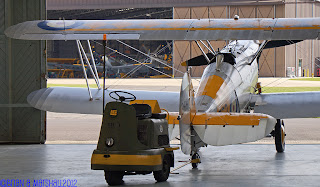 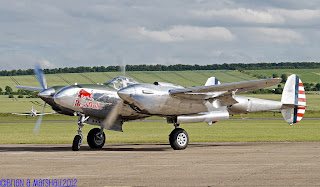 Thanks to Brian for allowing us to post the pictures.  To see more of the pictures from this weekends Flying Legends show visit... http://forum.planetalk.net/viewforum.php?f=16

On a similar note we just finished watching the DVD from last years event.  If you love Warbirds this is a must have video for your collection!  Purchase it here... http://www.planestv.com/

Enjoy the pictures and videos!