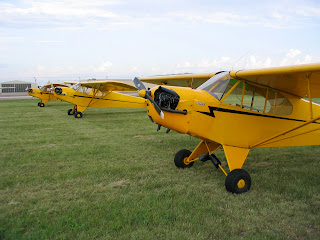 In the 1930s and 1940s aviation publications I have read there are stories about air meets and convoys where light planes use to gather at different points about the United States.  Modern day airshows and flyins take their place but it is cool to see someone do an old time convoy!  See the press release below from the American Legend Aircraft Company.
For Immediate Release
Contact: Dave Graham – 903.885.7000, dave@legend.aero
American Legend Aircraft Company To Host Gathering For Cub Convoy To Sun ‘n Fun 2011
SULPHUR SPRINGS, TEXAS, FEBRUARY 28, 2011 – American Legend Aircraft Company announced today the company will be hosting a fly-in/out gathering for the 75th anniversary Cub Convoy to Florida. American Legend is a recognized contingent leader for the 2011 Cub Convoy. The company will be coordinating a state/regional group together for the flight to Florida and mass arrival at Sun ‘n Fun Fly-In.
American Legend, with the assistance of Sulphur Springs-based EAA Chapter 1094 and Sulphur Springs Municipal Airport (KSLR) officials, will sponsor a sequence of events at KSLR. Aircraft arrivals are scheduled for Friday, March 25th. That evening, a hangar dinner will be served at American Legend Aircraft Company headquarters. On Saturday morning, a group departure will take place for an expected arrival at Perry-Foley Airport (40J) in Perry, Florida on March 26th.
KSLR has both hard surface and grass runways available. Fuel discounts and free aircraft parking will be available to all participating aircraft. Camping is available on the field. Shuttles to local hotels will also be been arranged.
The 75th anniversary Cub Convoy to Florida is a re-enactment of the first Cub Convoy to Florida held in 1936. The 2011 event commemorates production of Cub aircraft for more than 75 years. Beginning with the Taylor Aircraft E-2 Cub in 1931, and continuing today with the American Legend Cub, this aircraft type excels in flying pilots, students, and passengers for recreation, liaison, and pleasure.
American Legend participated in the 70th anniversary celebration in April 2006, when the Convoy of Cubs arrived at Lakeland Linder Airport for Sun ‘n Fun Fly-In. In similar fashion in 2011, a gaggle of Cub aircraft will make the eight-mile final leg of their journeys to Lakeland Linder Airport in unison. Many Piper rag-wing aircraft from E-2 to PA-22, and the all-new Legend Cub, are expected in the Cub Convoy. These aircraft will gather at Plant City Airport (KPCM), and then, en masse, fly out to Lakeland for an expected arrival on Monday morning, March 28th. The Cubs will land and taxi in parade fashion on the grass strip.
The Legend Cub from American Legend Aircraft Company is a thoroughly modern aircraft based on the American classic Cub. Since its introduction in 2005, the Legend Cub has led the light-sport segment as the best selling American-manufactured aircraft. The Legend Cub continues a more than 75-year history of providing memorable flying experiences.
The Legend Cub will make its sixth visit to Sun ‘n Fun Fly-in arriving in the 2011 Cub Convoy. The Legend Cub, Legend AmphibCub, Texas Sport kit version, and a fully restored Piper J3 will be on display during the show. American Legend will be in booth number MD-1-D, located along the flight line.
American Legend Aircraft Company manufacturers the sport certified Legend Cub and Legend AmphibCub, and the amateur-built Texas Sport—an aircraft kit based on the Legend Cub. The company’s Restoration Services division performs work on most tube-and-fabric aircraft, and manufactures parts to original manufacturer’s specifications.
For further information, contact American Legend Aircraft Company at 1810 Piper Lane, Sulphur Springs, Texas 75482; call 903-885-7000; or log on to www.legend.aero.
at March 04, 2011 1 comment: