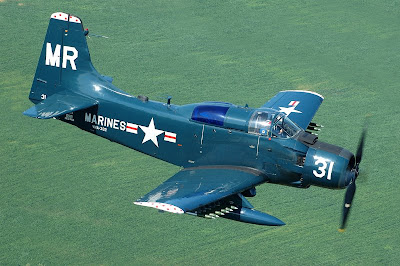 Here is a nice shot I came across last week of a AD-5/A1-E Skyraider. This big machine is based out of St. Louis, MO. Click here for some of its history. Thanks to Trey Carroll for allowing me to post his photo.
at December 28, 2008 No comments:

With the holidays being so busy with family and friends I have not flown much lately. Happy that my 170 just fires right up and flies perfectly when I want to go. Slid out to the airport late this afternoon and flew for about 20 minutes. Looking forward to flying adventures in 2009!

The last couple weeks I have been dumping my collection of aircraft photos on to a portable drive. My wife found a good deal on a 20 gig drive that hold TONS of my photos! Now that the airshow photos have been moved to one place I am starting files of individual aircraft types. Hope to be posting more photos soon! 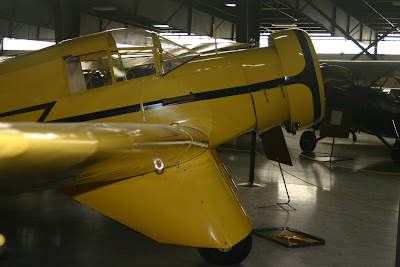 Caught this rare Aeronca up at the WAAM up in Oregon. More pictures from the museum here.
at December 24, 2008 No comments:

Email ThisBlogThis!Share to TwitterShare to FacebookShare to Pinterest
Labels: Aeronca 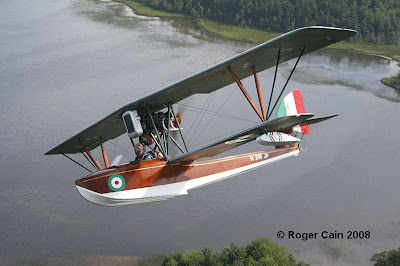 Earlier this year a forum post caught my eye. A very nice scale replica of a Macchi seaplane was pictured and the pilot posted his comments. Thanks for Roger Cain for the pictures and Eric Presten for the commentary and their permission to post it here. To see all the pictures and comments click here.
Eric writes... "I did the first three flights on the Macchi M-5 that are shown in the pictures above. It was built by Jason Petrolje in Holland, Michigan. A man of amazing talent. He has also built, an Albatros and a Spad over the years, both of which have since been sold to other owners.
The craftsmanship on this airplane is exquisite and it looks like a Garwood clear varnished boat with a set of Nieuport 17 wings bolted onto its top deck. The airplane performs well, but due to limited aileron travel, I was only able to do flights down the lake in ground effect on the first day. It has since been flown to altitude, and we are planning a week of flying this summer to find our way around it’s envelope.
I call this airplane a lawn chair airplane. It is so beautiful you can just sit in your lawn chair and watch it floating in the water in front of you. Flying it is just a bonus. It has fantastic lines and gets out of the water easily on only 125 hp. The missing outer struts are now installed, and the airplane was built from a very complete set of original plans. It even has the original airplanes folding wings. The landing gear shown is only a beaching gear, as the airplane is a true seaplane. The reason for building the airplane in 7/8 scale is unique to seaplanes. Hangers next to the water with easy access are very rare. Jason had a friend who used to have a Volmer Sportsman. He had sold the airplane, but the hanger remained. Jason had to scale down the airplane to fit in this existing hanger. This modification also helped with the fact that the airplane was to be powered by an engine of less horsepower then the original."

Great looking machine. Thanks Roger and Eric for sharing the experience!
at December 11, 2008 No comments:

Received an email from Addison Pemberton with news of the first flight of Mister Dickenson. Looks to be a mean machine!

Here's a little information on Bruce Dickenson's hybrid "Mister Dickenson". First off this is not a modified Howard DGA, Bruce Dickenson, who's grandfather was one of the original founders of the Santa Paula Airport in the 1920's designed and build "MR. D " from scratch. He emphasizes that he borrowed a bunch from Benny Howard's, DGA and Howard's famous racer Mr. Mulligan designs and why not. He was pretty familiar with the Howard line of airplanes. The Dickenson family has been flying the same Howard DGA for almost half a century.

Bruce wanted and airplane with a little more performance than the DGA. He decided what he needed was a cross between the comfort and nice flying characteristics of the DGA and the speed and performance to Howard's racer "Mr. Mulligan". The result after eights years of pains taking labor is the beautifully crafted "Mister Dickenson". Bruce built the airplane pretty much by himself. Of course there are a lot of talented people around the Santa Paula Airport that lent a hand when it was needed. And naturally getting advise on how to do anything around and airport is never a problem.

"Mister Dickenson" is powered By a 600 HP Pratt & Whitney 1340 engine. It was designed to have a cruise airspeed of 210 MPH. The first reports look like the airplane is going to meet that target. Check with Bruce

When your in Southern California drop in to Santa Paula some weekend and take a look at "Mister Dickenson" and the other wonderful antique and Classic airplanes that live at the airport. Try and coordinate your visit to Santa Paula Airport on one of the days that the Aviation Museum of Santa Paula is open. They have a new museum facility and a "Chain of Hangar" which is a great walking tour of some great aircraft and aviation displays.

Curtis Fowles of MustangsMustangs.com has posted his photos and stories from the 2008 Reno Air Races. His photos are a MUST SEE! Check it out here.
at December 02, 2008 1 comment: