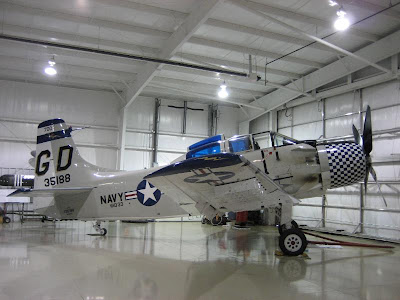 Skyraider Bu.# 135188 is now wearing a new coat of paint. This ship was first restored for collector Bob Pond back in the early 1990s and flew in a bright blue paint scheme for many years. It was flying out of Olympia, Washington from 2001 until recently. It is now based with Brent Hisey in Oklahoma. Brad Pilgrim caught the ship in its new overall gray/white scheme and has allowed me to post a picture. Thanks Brad.
at March 26, 2009 1 comment:

Les Whittlesey (owner of NC18906) sent me a few pictures from the Casa Grande Antique Fly-In out in AZ from this past weekend. Three restored Lockheed 12s were on the ramp. NC14999 has returned to the U.S. after having spent a few years in New Zealand. NC2072 is now wearing its originally restored colors after wearing movie paint for its role as Amelia Earharts Lockheed. Then NC18906 is the award winning polished and red ship. These three have not yet attended a show together so it made for quite a site!
at March 11, 2009 2 comments: