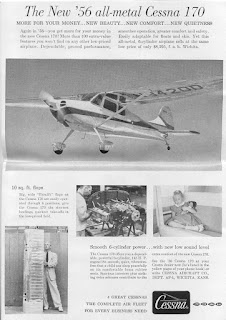 We scanned another cool advertisement for the collection. The Cessna 170 is dear to my aviation heart as I owned one for 17 years. The 170B is an outstanding airplane. 115mph cruise, 4 people could go for a local ride, 2 people could enjoy a cross country trip with bags. A nice flying tailwheel classic. This advertisement shows a 1956 170B and mine looked just like this. It had blue and cream trim with lots of polished metal. Best I can tell from the paperwork mine was the 14th 1956 model built. Great memories of a great airplane.
This is a fun ad. The big flaps are shown to scale with a finely dressed man and the little girl sleeps in the back seat! It was a nice quiet airplane but not really quiet enough for napping children!
We will keep scanning ads just like this one for our Classic Cessna collection to be offered in the next month or two on our Patreon. Join us on the journey in aviation history through vintage advertisements! Link to Patreon here.

For more history on the Cessna 170 read the article below by my late friend Bob Baas with edits by George Horn.

The History of the Cessna 170

Early in 1948, aviation publications across the country were publishing press releases similar to the following, which appeared in the February issue of FLYING magazine:

Wichita, Kansas - A full line of Cessnas will roll off the lines this year. Deliveries of the new 1948 model Cessna began early in January ... The big news in the way of completely new aircraft at Cessna this year is the Model 170, a four-place plane powered by a 145 hp Continental engine. Selling at $5,475, this new 170 is the low-cost four-placer to complete Cessna's full line. Deliveries are expected to begin in March ...

During the late 1940s through the mid-1950s over 5,000 Cessna 170s were manufactured and well over half that number survive today. This alone should indicate that this aircraft has certain qualities that make it a desirable aircraft to own and has also gained it recognition as a Neo-Classic in various aircraft organizations.

The Cessna 170 began its life looking much like its little brother, the Cessna 140. In fact, the 1948 C 170 is quite often mistaken for the smaller two-place C 1 40 by the casual observer. In 1948, Cessna expanded and stretched the 140 to make it a four-place aircraft and called it the 170. It had no dorsal fin, had fabric-covered wings, vee-type wing struts and three C140 fuel tanks to give it the necessary range for its larger engine. The engine used was a Continental C145 (later designated the 0-3 OOA) and would be used throughout the entire production run of Cessna 170s.

The first production model was serialed #18001, but both it and #18002 were experimental and eventually scrapped by Cessna. The first C170 produced for sale to the public was SN18003, which rolled out of the factory doors on 6 February 1948. She made her first trip on 27 February. From Wichita, she made demonstrations for Cessna dealers across the United States .... Little Rock, Orlando, Miami, Birmingham, various cities in Texas, Salt Lake City, Boise, and on to Bozeman, Montana on 5 May 1948. She bore the numbers N2500V and was based in Montana until sold to a dealer in Calgary, Alberta in 1973. The plane was purchased by Mr. McNiven in that year, and he flew the plane approximately 75 hours until he was involved in a landing accident in 1976. The aircraft is rebuildable, but the owner feels that the plane (in it's current condition) is worth $7000 due to its historic significance.

Beginning very late in 1948 with SN18730, Cessna began producing the all-metal, slicked-up version which we recognize today as the 170 - single strut and with a dorsal fin identical to the one used on the C195. The price new was $5,995, and it was called the Model 170A. The plane had an all-metal wing (actually saving 10 lbs of weight over the "ragwing" by doing away with internal bracing no longer needed with all metal construction-gh) with slightly larger flaps which ran from a 0 degrees setting full up to a full down setting of 50 degrees. The 170A, which was produced through 1951, is commonly called the 'straight wing' model because, unlike later 17OBs, the C170A has no wing dihedral. There were very few changes made in the C170A in its three years of production. The chief difference lies in the cowling. The 1949 model used the same fixed cowl flap on the cooling air outlet as the Ragwing. In 1950, the cowl flap and rear cowl opening were changed to the configuration used on all subsequent models. Incidently, the first production model of the C170A series, SN18730 N3843V, is still flying, and is featured later in this book with articles on rebuilding and updating of the Cessna 170 series in the Modifications Section, page 89.

Cessna Introduces The 170B

The Cessna 170B was introduced in 1952 and continued in production with several changes until production on the series ended in 1956. The most obvious change from the 170/170A is the large Semi-Fowler flaps similar to those used on the L-19. (Note: Actually the L-19 wing and the C170B wing are essentially the same except for military hardpoint/hardware, and the flap hinges/tracks.-gh)The flaps were labeled'Para-lift'by Cessna, but the term "barn door" is the more common description. The flaps originally had four settings: 0, 20, 30, and 40 degrees. Beginning in 1955, Cessna added a 10 degrees flap setting. The 10 degrees position is probably the favored setting for normal take-offs since there is a very slight pitch change with flap retraction compared to 20 degrees.
The dihedral angle was increased to 3 degrees (Note: 2 degrees, 8 minutes actually-gh) on the 1952 and all subsequent models (the C170A wing was flat) and more twist was given to the wing between the strut and the tip. The stabilizer and elevator shape was changed and the aerodynamic balance area was increased. A mass balance, enclosed in the aerodynamic balance section, was added, requiring less control pressure. The C170B elevator, when raised and released, simply floats to the down position, whereas a C17OA's falls with a bang.

In 1953, the engine cowling was changed from the center-hinged type with an internal air box to a full- pressure cowl. Cabin heating was also improved by replacing the single outlet with a manifold-type that runs across the firewall with outlets for both front seats, a windshield defroster, and ducts to the front doorposts for heat to the rear seats. The instrument panel was extensively reworked. The small T-shaped floating panel was replaced by a full-width floating panel indentical to the one on the C180. Piano key type switches were replaced with push/pull type and space was provided for side by side radio installation in front of the pilot. Overhead panel lighting was also introduced.

Until mid-1953, the C170 had spring steel landing gear legs that were interchangeable between right and left side of the aircraft. These are readily apparent by their thick ankles and outward bow. This system was changed in niid-1953 with SN25612 (in other words, SN25613 and subsequent had the later gear.-gh) to the non-interchangeable right- and left-hand narrow-ankle stiff gear.

Changes in the 1954 C 170B were removal of the fuses from the lower instrument panel to a separate fuse panel below the panel on the left side, placement of the battery on the left side of the firewall, and the flush riveting of the wing struts at the lower end.

There were two major changes in 1955. The most obvious one is the shape of the rear window, as it was squared-off in the rear instead of being elliptical in shape. The other change was to the tail wheel steering by the use of a cable running through a pulley system to the tail wheel instead of the previously-used rudder horn spring system.

The Cessna 172 was introduced in 1956, and tricycle gear took over the general aviation scene. Since Cessna had parts left for some C170s, they continued to produce the C170B with a few changes. To keep costs down, the interiors were changed to the molded type like the C172, the window on the right side was fixed in place instead of swinging out, and brakes and flight controls were made optional on the right side.

Performance
The stock Cessna 170 will pretty much do what the Owner's Manual says. It will get into a much shorter field than it will get out of at gross weight. It will cruise in comfort at about 118mph at 65% power at 4000'-7000' and burn about 8gph with engine properly leaned. Some people say a C170A is faster than a C170B due to less wing dihedral and flap drag, but it's really the individual airplane that makes the difference: how it is rigged, the number of antennas and other drag-inducing obstructions, overall condition, etc.
Most C170s will take two adults, two children, 100 pounds of baggage and full fuel, 37.5 gallons total, 33.5 gallons useable,( A&B models, 42 gallons total, 37 gallons useable) and still be legal for a gross weight of 2200 pounds. The C170 will climb 500- 700fpm at this weight and land at about 52mph.
The Cessna 170 is a good, honest taildragger and has had very few AD notes or problems with maintenance.

There you have it, a picture of the Cessna 170.

(This article was taken from "The 170 Book" available from The International Cessna 170 Association. It's original author the late Bob Baas and includes edits by George Horn)
at September 18, 2018 No comments: