There is something about vintage advertising that has captured my interest.  Vintage cars and airplanes have some of the most unique advertising.   They transport you back to another time and place.  The clothing and hair styles are very telling of the era along with the wording of the ads.  In my collecting I have pulled some of my favorite ads and scanned them to post here and note some of the details that stand out.

Aeronca leads with the heading "Tandem Riding Is Out Of Date" and words the ad with "comfort, convenience, visibility."  Take note that they are talking about their Low Wing and C-3 models!  Comfort?  In a C-3?  Even when they produced their new models of the Chief, was that comfortable??  The side-by-side seating made for a cozy arrangement.  I truly think that people back in the 1930s and 1940s were a lot smaller, slimmer and trimmer!  Having flown my side-by-side Taylorcraft for over 300 hours and being wedged in to the bench seat with riders it makes me wonder why they thought this was a good thing?  Conversations and flight instruction may have been easier by looking each other in the eye but in flying any length of time, like a cross country, it would be tight.  The ad finishes with the words... "Aeronca will never build a cheap ship. Aeronca will continue, as always, to build the best low cost plane!"  Fun ad.

The fact that they went on to build the Champ and Chief for many years to come.... makes me think that the ad was right!
at April 18, 2010 No comments:

The Stinson Model O that has been built up by the craftsman at Evergreen Aviation Services takes to the skies!  Hats off to the people providing the funds and the laborers that made this rare ship fly!

Email ThisBlogThis!Share to TwitterShare to FacebookShare to Pinterest
Labels: Stinson 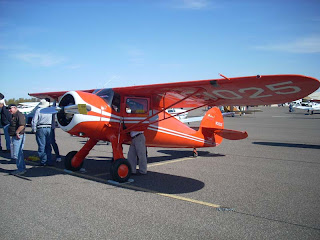 We are blessed here in Texas to be able to fly almost year round even in the coldest or hottest months or the year.  I know in other parts of the country with the change of seasons to Spring the airplanes start to see more fair weather for flying.  A good number made it to The Cactus Fly-In out in Arizona for one of the first vintage aircraft shows of the season.  Several good reports have been brought back via some Texas AAA members.  Terry Wallace from the Texas Chapter was there and took the picture above of the Luscombe Phantom that was the Grand Champion award winner.  Check out this link to see the list of award winners from the fly-in.  Congrats to Dick Ramsey for taking home an award for his Texas based Luscombe 8E!

So let the fly-in season begin!  What shows are on your radar for this year?  I know MANY will make the bigger shows but what local shows will draw you vintage aircraft enthusiasts?  Last year we made the Northwest Antique Fly-In and were very happy we made the trip to that smaller, local event.

In mid-May we will be off to the Chino Airshow.  Their show is a Warbird airshow but many vintage aircraft are usually in attendance.  Cant hardly wait for that show.  Right after that (the end of May) will be the Ranger Airfield fly-in back here in Texas.  Hopefully I can fly the 170 down for that grassroots event.

One show that has been a June tradition for many years is the Texas Antique Fly-in that will be moved to October this year.  The Texas heat has taken its toll on attendance numbers for this event the last few years so the members have voted to move the event to the Fall when the Texas heat has subsided.  Event details will be ironed out soon and the Gainesville, Texas airport should be full of vintage aircraft this Fall.

As the season begins I will be posting a few photos and highlights from shows we attend or receive reports on.  Bring on the shows!  Blue Skies and Fly safe this year my friends!
at April 06, 2010 No comments: