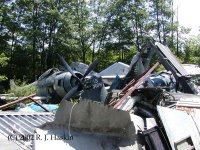 In the good old USA we see a variety of aircraft collections displayed in various settings. Big or small these collections may be in spotless hangars with painted floors in big cities or grass airfields with dirt floored hangars out in the middle of the country. One well known collection, but not highly published, is Walter Soplata's collection in Ohio. A recent forum thread about his collection was posted on the WIX forum. Reprinted here is an article from my friend Randy who visited the collection. Enjoy this unique story about the quiet and private collector from Ohio.

sadly, I just viewed Mr. Soplata's obituary online. He passed away in November of 2010 at the age of 87. May he rest in peace.