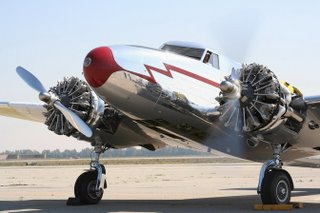 The cabin door has been shut and the lineman has checked to make sure the chocks are in place. The smell of fuel is still on his hands and the oil from the recently checked dipstick on his coveralls will be there forever. A mechanics wrench hitting the floor of the hangar startles him as he walks to the front of the Lockheed 12. He looks over his shoulder to give the mechanic a glare as the mechanic reaches from under the engine of the Waco Custom Cabin for the wrench. Just a few moments before he loaded the last bag in the nose for the sharply dressed businessmen about to depart to an important meeting. The linemen doesn't remember where they are going, just that he worked hard all morning to have the 12 ready for the noontime departure. His eyes meet the pilots as he signals that the props are clear and ready for the Pratt and Whittneys to ignite. A loud whine comes from the number one engine and smoke and noise soon follow. The lineman steers clear of the spinning propeller to take a good look around the number two engine and signals to the pilot that it is clear. More noise and smoke is heard. The chocks are pulled and the 12 rolls off the ramp toward the runway. When the Lockheed turns on to the taxiway the linemans hat almost blows off and he takes a deep breath in. The smell of burning oil coming from the radial engines gives him goosebumps. Just another day on the job.
This scene could be from 1939 or today! In just a few months Lockheed 12 S/N 1277 will return to the skies after a very extensive restoration by Les Whittlesey and his crew in Chino, California. Look for this machine at future airshows around the country! I'll be the one standing behind this Lockheed 12 holding my hat on and taking a deep breath in!
at April 23, 2006