The Greatest Generation was on the ramp at Meacham Field selling rides in their C-47 "Southern Cross" during the AOPA Summit AirportFest.  Visibility at the AirportFest ramp provided interest to the organization and their mission. 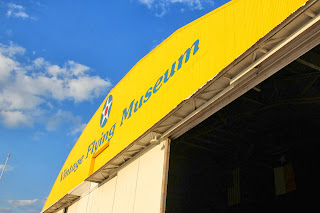 Like many operators who maintain and fly vintage aircraft The Greatest Generation Aircraft has found some creative ways to raise funds.  As a follow on to their first fund raising auction earlier this year a second auction was held last weekend during a very busy week of aviation events in Fort Worth. (Link to my blog post covering the first auction.) The funds from the auction are rolled back into aircraft ride operations and aircraft restoration projects. An auction of aviation memorabilia and aircraft parts attracted my attention again so I signed up to bid on a few items that might fill a spot in my office!
As the sun began to set on the Vintage Flying Museum hangar the auction items were lit up the bright rays shining through the hangar doors.  Rows of propellers, shiny metal cowling pieces, worn aircraft instruments, Russian pilot helmets, even two complete aircraft along with other one of a kind art pieces made from aircraft parts would draw a crowd of about 50 people into the hangar for bidding.  Over 200 items took about three hours to auction.  Only a few pieces did not sell so it would the auction was a success.  I only walked out with one item (a manual gear extension handle from a vintage aircraft) but I am happy with the entertainment the auction provided.

Hats off to Jim Terry, Dana Wood and the crew at Greatest Generation Aircraft for the enjoyable evening.  Hopefully the funds raised will keep their birds flying another season.