Andrew King, antique airplane restorer and pilot, recently flew the rare 1928 Cessna AW to its new home at the Eagles Mere Air Museum in Pennsylvania.  This extremely rare airplane is the oldest flying Cessna and was restored by Gar Williams back in the late 1970s, early 1980s.  Andrew posted pictures of the the Cessna on a few internet forums so I thought it was worth a re-post here on the blog.  Below are a few notes from Andrew about the trip from Illinois to Pennsylvania.  Thanks to Andrew for allowing me to re-post.  An amazing airplane at the age of 83!  I bet Cessna never imagined an AW flying the skies 80 years after it was built! 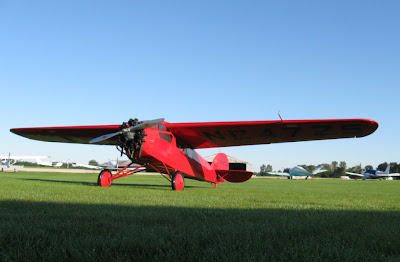 The AW flies quite well for a 1928 aircraft. It has frise type ailerons which are quite effective and not as heavy as the ailerons on a lot of the aircraft of that era. The rudder is too small but the 'plane is reasonably stable directionally, and you get used to it. Elevator is pretty normal, not too heavy, and effective. I ran the 110 Warner at 1675 rpm, which produced a cruise of about 90 mph-- when they raced them back in 1928 they got 125 mph out of them, probably at full power. It would out-climb the 2000 C-172 with 160 hp fuel injected Lycoming and two people on board. Stall was about 45 mph, and one of the surprises was the sharp break and wing drop. A base-to-final stall would be a bad event. It was about 9 flying hours over two days from Poplar Grove to Eagles Mere, the longest leg was from Mt. Vernon, OH to Somerset, PA, 2:25, and after being jammed into that small cockpit for that long I had to walk around the ramp for a while to straighten out my legs. There are two 22 gallon wing tanks, and fuel burn was about 7 gph.
It was quite an amazing experience, and thanks to Gar Williams and George Jenkins for making it possible.
Take a few minutes and watch the video here.
http://www.youtube.com/watch?v=J2j4qsCV_24
Links - Eagles Mere Air Museum - Poplar Grove

One Great Video! Thanks. -Craig

Very cool stuff, I love planes and will have to put some stuff up on my blogg, hope you may swing by for a look cheers.