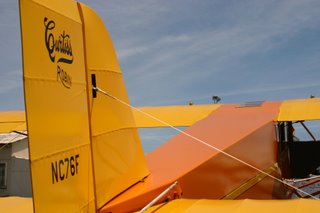 On Saturday morning I set my alarm so that I could make it to the airport early to shoot some pictures in the morning sun. Sounds different to be on vacation and setting my alarm but, it is all about the airplanes! There were about 50-60 airplanes on the field as of Friday. It sounds like in years past there were as many as 1000 airplanes in attendance! Not all were antique airplanes but a good many of them were. The steady stream of incoming airplanes made for many opportunities to shoot pictures of the arrivals. My quick count of airplanes on Saturday was about 150-160 that flew in.
California has many climates that seem to exist within just one part of the state. Merced is south and east of the San Francisco area. The local area is very flat but off to the east the Siearra Nevada Mountains show off their snowy peaks. The sun heated up the event and by mid-day is was up into the 90's. Just Thursday I was in the Sonoma area enjoying the temps in the 70's and 80's! The Merced show plans for the show to be the antique airplanes that are displayed by their owners. Later in the day the owners fly in a parade of flight. About twelve of the antique airplanes fly around the pattern to give the general public a chance to see the rare machines in the air. Also there were three airshow acts that flew short aerobatic demonstrations, an Edge 540, an Su-26 and a P-51. The P-51, named Hell-er Bust, was actually just passing through town on its way to a new owner in the Seattle area. So it was a great treat to see it fly a routine in the hands of Ed Shipley.
The awards banquet Saturday evening was a very nice steak dinner. The Flyin Chairman handed out the awards and the top award went to the Curtis Robin. One event that I wasnt expecting was an invitation after the banquet to the local dirt track. Oh yeah, dirt track car races! Evidently the pilots from the Sonoma area like to take in alittle local culture on Saturday night! This was highly entertaining to watch. Not only the people that were in attendance, these were serious racing fans, but the cars themselves were entertaining. Sponsers for the beat up junkers were a local cigerette store, corner garages and car dealers. The group I was with made guesses on what the most popular race car driver name was. Bubba maybe?The trip to California was well worth it. Fun times in Sonoma to visit the airports, pilots and airplanes I had only read about, and it was a great flyin at Merced.
Pictures to come in the next couple days.
at June 04, 2006