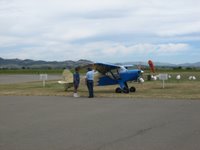 One of my goals this year was to attend an airshow/flyin that was new to me. The Merced Antique Airplane Flyin was my pick. I launched off early Thursday morning for my planned trip to California. The United Airlines flight I was on was direct from DFW to SFO. The flight being over three hours long included an inflight movie. King Kong was the show for the flight and
since I had already seen it I was taking naps inbetween some of the scenes I liked. At one point I was awakened to loud exclaimations of four letter words! The elderly couple behind me was obviously surprized by one of the startling scenes in the movie. Then it happend again! What I realized next was it was not the old man... it was the old women who had the colorful mouth! After a few minutes of her colorful language I had to work hard to ignore her. As we started our decent info SFO the flight attendant announced that when we arrived to please stay in our seats for there was a medical emergancey! Most of the airplane waited patiently as the EMTs came on and gave an elderly lady some oxygen. Sounds like she was just having shortness of breath. For some reason the older lady behind me began going off on the lady who needed medical
attention! Guess her mother didnt teach HER any manners!
OK... off to my flying activities... I jumped in the rent car (a cool little Chevy HHR!) and drove across the Golden Gate bridge (that was fogged in) and was winding my way into Sonoma in just over an hour. I met my friend Eric Presten at Sonoma Skypark airport. Eric was working on a friends Cub when I arrived so I nosed around the hangar he was working in. In this hangar was a one of a kind Luscombe! (I think it was a model 4 - will confirm later) This was just the begining of the tours Eric gave me all day at Skypark and Schellville, which is just two miles away. To get to Schellville we jumped in Eric's Piper Clipper. Clippers sure are neat machines. Four seats, 150HP Lycoming, 130MPH... wonder why we don't hear much about these airplanes!? Note the gear on the Clipper! Two sets of tires! Just some of the airplanes on the hangar tours were the Curtiss JN4, Curtiss P-40 N Ryan STA, Alexander Eaglerock. Truely amazing to see so many rare airplanes at these two fine airports.
To finish off the day Eric and I stayed up late at his house (while his family packed for Merced) looking through some of his collection of antique airplane photos. Eric recently published another book from the photos in his collection. (Email me if you want details on the content and if you want to purchase the book.) All this is just one day of vacation! More to follow...
at June 03, 2006