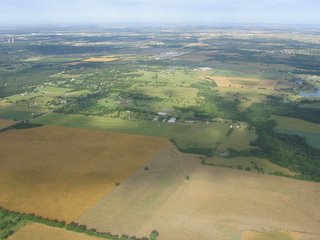 The Texas weather finally settled down last weekend to give a good day for flying. Sunday's light winds a sunny skies made for a great therapy flight. It had been several weeks since the 170 had been exercised and I was in need of some aerial therapy. The flight turns into therapy when the world drops away and the view from above distracts me from the busyness of life. A friend of mine went along on the flight so I gave a tour of some of the large homes that stand out from the landscape. One of the homes looks like it was transplanted right out of the Middle East! Also on the tour was a fly-by down the runway at historic Hartlee Field, North of Denton. (picture above of Hartlee - taken last summer) The vintage round topped hangars are still intact along with the main North/South grass runway. This field once trained pilots in basic aviation before they flew off to join squadrons to fight the fight in World War Two. The local flight became a trip back in time to the vintage airfield and the 170 was our time machine!
at March 05, 2006