When hangar flying discussions turn to rare airplanes I pay attention. Especially when the word prototype is tossed in! While visiting a friends hangar he said he had completed the fabric and paint work on the rudder of a North American Yale. Not just any Yale but the prototype NA-64. The fixed gear trainer from the T-6 family of aircraft. The project was coming together after about two years of refurbishment and I wanted to see it! 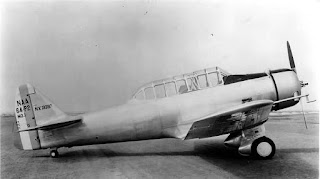 It was an odd Thursday afternoon in February 2017 that I had taken off work to spend time with my son. He loves to visit the local airports so we drove around Hicks Airfield in Ft. Worth. After stopping to visit a few friends and asking about the Yale we were coming up with no clues on it’s whereabouts. Feeling pretty bummed we started to leave the airport. At the last taxiway I looked back over my shoulder and spotted the Yale! It had just been pulled out of the hangar for an engine run! We found it! 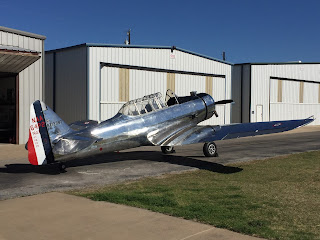 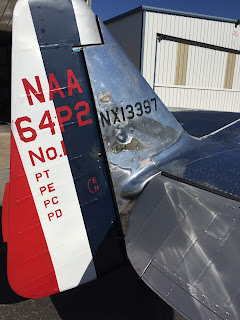 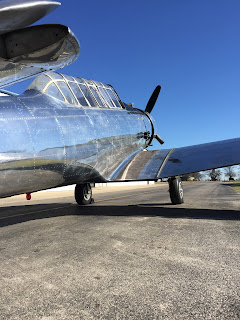 The owner, Mark Cyrier, told me the story of finding the airplane, Yale NX13397, and it’s refurbishment. Some photos and part of the story are posted on the Warbird Information Exchange forum - follow this link…
http://warbirdinformationexchange.org/phpBB3/viewtopic.php?f=3&t=56209

We almost missed it... so it was very cool to finally find the Yale that I had been hunting for.

Mark sent me an email today to report that it has flown 15 hours. This just might be the oldest flying North American trainer currently airworthy.

Email ThisBlogThis!Share to TwitterShare to FacebookShare to Pinterest
Labels: Warbirds