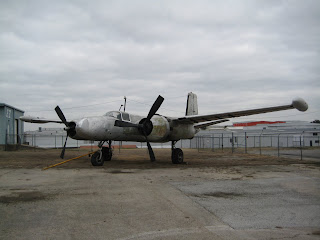 My wife and I attended the February Texas AAA Meeting at Fort Worth's Meacham Field.  Our meeting was held at the Vintage Flying Museum.  This former World War Two hangar once housed B-29s and is now home to several flying vintage bombers.  The B-17 "Chuckie" makes her home here along with the B-25 "Pacific Prowler."  A recent bomber addition flew in just weeks ago is a A/B-26 Invader.  Our hosts Doc and Chuckie Hospers gave a short program that included the history of the museum and their beloved B-17. Joe Haynes passed on some history of the Texas Chapter and his involvement since the beginings of the group. Lynn Hearn also told of his flying history and chapter membership.  As the meeting came to a close members were treated to the sounds of a maintenance run on the B-25 is the crew did an engine run up.  About 50 members were in attendance.