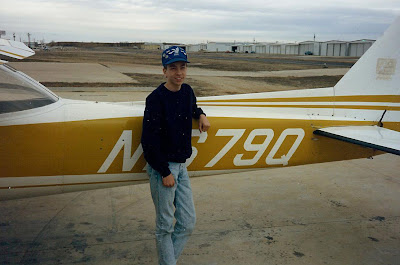 My Mom reminded me that this week is the 20th Anniversary of my first solo. Amazing how fast 20 years flys by! It was an overcast day at Northwest Regional Airport (52F) in Roanoke, Texas. The winds shifted from the South to the North right before my flight. My instructor Bill Lemmon rode with me for two or three landings and then told me to stop on the taxi way. Stop? Where was HE going? His words to me before he closed the door was something like... "you will do fine.... but watch out for the dummies out there flying around." The excitement built as I taxied the Cessna 150 down for takeoff. It jumped off the ground and I grinned. Three landings and I parked it. I was sixteen and I flew an airplane. At the time I remember dreaming of what vintage airplane I would buy as my first airplane. A year and two months later I would take my checkride. Eight months after my checkride I would purchase my 1946 Taylorcraft. Time flies!
at January 23, 2010